Rudkav International is a leading manufacturer of POS (Point of Sale) billing paper movie ticket rolls that are now used in most movie theaters. Movies are still an extremely popular entertainment option for most Indians and movie industry in this country is still the most productive as it produces the highest number of films in the world. While the Hindi film industry, better known as ‘Bollywood’, produces the largest number of films in India, the film industry is also very well developed in the southern states of Tamil Nadu, Kerala, Karnataka, Andhra Pradesh and Telangana. They all add up to drive demand for thermal paper used to print tickets instantly. 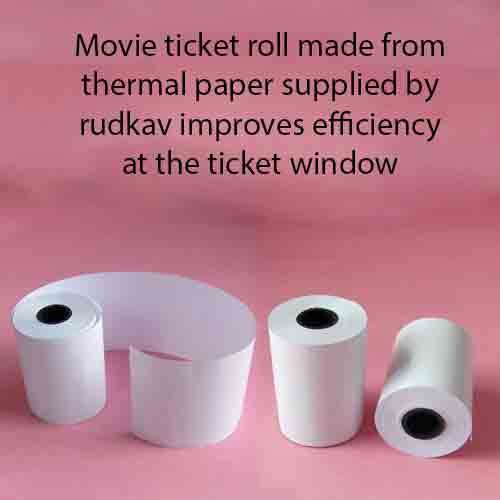 Managing the rush in movie theaters

Any movie theater manager would agree that managing the rush of moviegoers after a new movie is released can be very challenging. More than the mere logistics of regulating the movement of people within the movie theater premises, it is the process of issuing tickets in quick time that is critical. On the one hand, it sustains the revenue generation of the movie theater and on the other, it ensures that there is no chaos and confusion due to non-availability of tickets. With pre-printed tickets that need manual acknowledgment there is always a chance of tickets getting siphoned off; not so with thermal paper cinema ticket rolls.

High quality thermal paper that is safe to use

Rudkav International is a dealer who uses BPA (Bisphenol A)-free thermal paper to ensure the safety of end users like cash counter clerks and consumers who receive them at the end of the movie supply chain. It has been proved by many researches, that continuous exposure to BPA can cause serious harm to humans, including cancer and infection of the lungs and kidney. We are wholesalers of different types of POS billing paper that can also be made of thermal as well as standard bond paper, which in turn can be coated or non-coated.